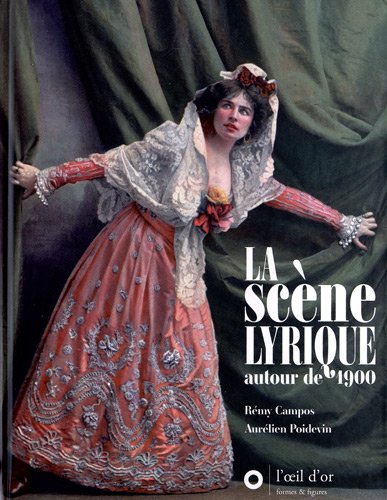 The old conception of staging was at its peak around 1900, and just then there was a proliferation of documents – theatre archive material, articles in the press, memoirs, treatises, engravings, photos, postcards – that keep a detailed record of operas of the time. For this book the authors have brought together the largest collection to date of pictures and accounts, providing information on every aspect of opera during those years. This imaginary ‘museum of the performing arts’ is more than a compilation: it takes us behind the scenes, focusing on all the live-performance professions: the artists themselves, of course, but also all those who generally work behind the scenes. This book takes a new look at the staging of opera, neglecting none of the constraints involved, including all the technical, economic and human aspects, on stage, below stage, backstage, in the wings, in the flies, in the workshops where the sets are built, and so on. And we come to realise just how important a part technical and scientific innovations play in the field of the performing arts. On stage, the singer has to deliver his speech in the same way as an actor. The rules of rhetoric and civility are strikingly constant in the theatre right up to the eve of the First World War. Even the actions of sitting, standing and falling were governed by social conventions and the rules of drama (but the singer could nevertheless take initiatives where body movements were concerned). Being an opera singer meant, to a large extent, adopting a set of gestures and facial expressions, based on the old traditions that had been kept alive. The authors have gathered together and studied hundreds of old engravings and photographs, thereby reconstructing the countless combinations of expressive gestures that were typical of the opera singer’s art. Finally, the participants would use costumes and makeup to amplify their expressive gestures and poses. The interrelationship between the singers on stage followed the theatrical conventions, as dealt with in detail in treatises of the time. Thus, when two artists were engaged in face-to-face dialogue, rather than appearing in profile, they were expected to stand in an unnatural position, turned three-quarters towards the audience, and sing more or less over their shoulder. Indeed, it was a rule that their movements on stage should never interfere with clear vocal transmission of the text and legibility for the audience of their gestures. Just as a painter composes a painting by arranging the main outlines, so the régisseur would place the singers on stage to form a living tableau. Such static moments were used to represent the expressive climax in operas, with all the constituent elements coming together harmoniously at that point. Thus, the relationship between painting and opera was not limited only to the sets. And sometimes the tableaux even represented well-known paintings.

This book contains over 500 illustrations: prints, engravings, photographs (in colour and black-and-white), reproductions of archive documents, and so on. The compact discs present, for the very first time, a complete recording of the first tableau from Act III of Richard Wagner’s Die Meistersinger (in French, 1944) and a selection of arias and orchestral pieces from the same operatic work, performed by artists including Georges Imbart de La Tour, Paul Franz, Marcel Journet, Georges Thill, Gabriel Pierné and others (1908–1935).

Rémy Campos
Rémy Campos is research coordinator at the Geneva University of Music (Haute École de Musique, HEM) and he also teaches music history at the Paris Conservatoire (CNSM). He is currently working on the history of musical practices in the nineteenth and twentieth centuries through projects involving not only researchers and musicians, but also students.

Aurélien Poidevin
Aurélien Poidevin is associate professor of history at the University of Rouen and scientific assistant at the Geneva University of Music (Haute École de Musique, HEM). He is a specialist in the administrative, social and cultural history of the Paris Opéra in the twentieth century. In recent years he has also worked as a stagehand at the Palais Garnier.