The oratorio The Promised Land, premiered under the composer’s baton at the Three Choirs Festival in Gloucester Cathedral on 11 September 1913, consists of three parts, each of which presents a succession of numbers for soloists or chorus. In the first part, Moses leads the Israelites into the desert and, by the grace of God, causes water to gush forth from a rock to quench his people’s thirst: ‘Behold, he smote the rock’, the chorus proclaims, before being joined by a trio of soloists (soprano, contralto and tenor) to praise God’s omnipotence. The second part depicts the doubts of the people during the Exodus and the prayers of Moses and Aaron; it ends with a solemn, melodious ‘Song of Moses’ for baritone solo and chorus. In the third part, the death of Moses is announced by a solo tenor, followed by a chorus of lamentation and a final quartet exalting God. Saint-Saëns acknowledged a degree of obscurity in the prose libretto, which Herman Klein drew entirely from the Bible, but he observed in 1916: ‘Biblical language is often mysterious, and that mystery is part of its appeal.’ A French version of the oratorio was performed at the Théâtre des Champs-Élysées on 20 February 1916, and a German version, on a text by Otto Neitzel, was published in 1914. 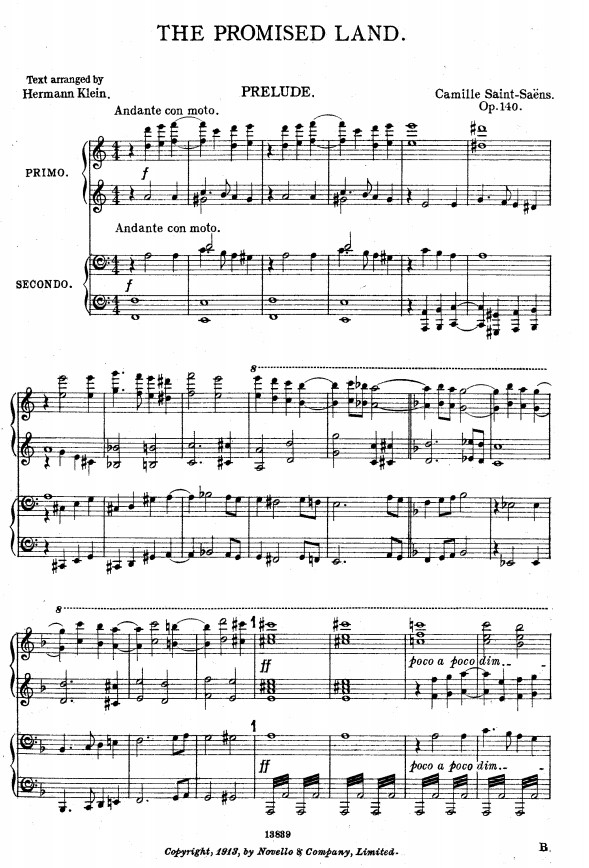